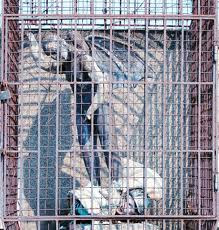 When I heard this story, I became interested. As well as feared of course. Satan - stepping over St. Michael?! It's kinda funny to think. I thought the creator just sculpted it by mistake, but if it was a mistake, then why he made it that way?

. . . And there was war in heaven: Michael and his angels fought against the dragon; and the dragon fought and his angels, and prevailed not; neither was their place found any more in heaven. And the great dragon was cast out, that old Serpent, called the Devil, and Satan, which deceived the whole world: he was cast out into the earth, and his angels were cast out with him . . .
-------Revelations 12:7-9

The verse is describing a war in heaven about how St. Michael the Archangel defeated Satan. That's the bases of all the famous paintings and statues of St. Michael picturing his boldness and strength, symbolizing the power of light over darkness. However, in a tomb in Malabon City, instead depicting the original scene, it was opposite. The statue shows a peculiar and dislikable position of the two. Like what I said - Satan was stepping over St. Michael.

Well, there are reasons why the owner wanted it that way. Actually, he was a religious person and has that thinking-out-of-the-box mind to symbolize and extend his sympathy to mankind. He even put somewhat like a short script of a play beside his tomb.

This statue was featured in some television shows in the Philippines. Rated K of ABS-CBN Channel 2 hosted by Ms. Korina Sanchez featured it.

By the way, the HE I'm talking about is the one buried in the tomb. Just read the whole article so you'll understand why I'm refering to him.

The person buried in the tomb is Don Simeon Bernardo of Barangay Concepcion. One reason that brought this story here in urban legend is the belief, and also the rumor of many people that this person was a satanist which, in fact, he isn't.

According to his grandson, Don Simeon was a religious man, and a very prayerful person. He also expressly wished to have the statue placed over his tomb as symbolism and as reminder that the society was continuously and slowly being engulfed by darkness, and that the devil is winning against goodness, and people is forgetting and setting God aside of their lives. Well, making the statue as his reminder, I can say, it was successful.

Behind Don Simeon Bernardo's becoming popular and bizarre statue, he also had a very sad story. He suffered a bitter life in Spanish Regime here in the Philippines. He was accused by being a filibusterer, and then put him in prison in Fort Santiago. He was also tortured their mercilessly, like some of the Katipunero's . They also made him believed that God doesn't exist and they indocrinated the belief of his children. Don Simeon died in 1934.[a]

Maybe that's the reason why he ordered to have the image.

Like what I said above, there was a script-like thing beside it (located in the left side if you are facing the tomb). This was supposed to be a dialogue if Lucifer (Satan) and St. Michael are talking with each other.

Many believed that the passage was taken from the bible, but back in his time (Spanish Era), commoners were not allowed by friars to hold a bible. Well, prettilly obvious that it has no basis in the bible - no verse.

By the way, if you wanted to visit, the Malabon Municipal Cemetery, which is connected to Caloocan Public Cemetery, is located at Barangay Tugatog, Malabon City and Sangandaan, Caloocan City. It's one ride from Monumento to Sangandaan.

Aside of the rumor that Don Simeon Bernardo was a satanist which is not true, there are also rumors pointing to the supernatural ability of the devil statue.


Well, the main reason why this rumor sprouted is that in late 1970's the original was replaced by the one we see now. The first was actually smaller, and it was replaced because people destroyed it.


Definitely NOT TRUE. People hate the structure because of its frightening look. Thus, people may intentionally throw rocks just to destroy it. And maybe this rumor emerged because of some tricky imagination, and perhaps just to scare drug addicts or some bad guys there who still wander over the place even at night. The cemetery is in the middle of the city.


I don't know how to explain that. My professor told me this rumor - he's from Malabon. They said that in some circumstances, goodness prevail over evil, then goes back if the latter prevail over the former.