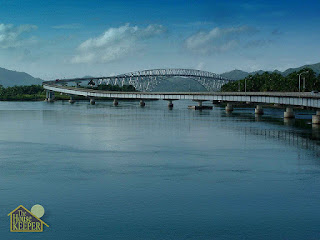 Bridges play a great role in a country. They connect two or more cities to each other and allows people to pass over obstacles under it. Those obstacles can be a river, a strait, or even a sea. They were created for many reason aside of being just a road. Actually, at the time of Spanish colonialism in the Philippines, bridges not only connects two barangays but it also indicates the border line of those villages.

In some movies, the bridges also appear as the last destination of a gentleman or a lady who failed in love. They commit suicide there. But actually, it doesn't only appear in movies, it also happens real-life. Thus, bridges become part of urban legends as a haunted bridge with a white lady roaming there every night.

On the other hand, people also perform rituals to strengthen the foundation of the bridge. They kill innocent children to scatter their bloods thoughout the whole bridge, and even mix their bodies on the cement. Thus legends about the bloody foundation of bridges rose.

One popular legend with the same story as like this is the San Juanico Bridge.

The San Juanico Bridge, renamed from Marcus Bridge, was the longest bridge in the Philippines with a distance of 2,200 m (7,200 ft). The bridge stretches from Santa Rita, Samar to Tacloban City, Leyte crossing over the San Juanico Strait. The bridge is considered one of the most beautiful structure in the country with visually attractive views.

According to legend, it has foundation allegedly been made stronger by the blood of numerous street children (some say babies). When it was under construction, there happened coincidentally a kidnapping in Samar-Leyte areas. Thus, they theorized that the kids were offered to a pagan or demonic ritual to guarantee the strength of the structure. Imelda Marcos, being in charge with the building, was said to be the master mind of the said events.[1]

This is why, people say, the bridge is haunted by many lost spirits. Others say that the success of the bloody rituals done for San Juanico Bridge encouraged others to do the same for their bridges and buildings. Only one detail was constant: the use of street kids as sacrifice.[1]


Urban legends really are deteriorated or altered versions of the true stories. If ever the legend about San Juanico Bridge is true, then the legend concerning the curse created by a mermaid or a diwata to Mrs. Imelda Marcos is definitely not real. Have you ever seen her legs? Or have you ever smelled her with a foul fish perfume?

The San Juanico Bridge might be the root of all the legends surrounding many bridges in the Philippines. Even the not-so-famous bridges became subject to this kind of ritual. Their similarities were the sacrifice of child's life. In some stories, it was not only the manghuhula who told the engineers what to do, but also the albularyos (shamans).

I tried to ask some people this question, Why not animals instead the innocent lives of children?. Their answers were almost alike, that life is so special, powerful and divine that it can strengthen the bridges' foundation against whatever catastrophy will try to ruin it. Thus, animals were not powerful for that. In addition, they don't know why they use children instead of adults. Perhaps, the reason might be similar to that of San Juanico Bridge - some of the street childrens have no parents, therefore no one would mind if they vanish suddenly. Or because children are innocent.

Actually, some bridges were not subject to this kind of sacrificial tragedies. Some of them, though have bloody foundation, was just haunted because the ghost was killed or killed themselves there. Others were haunted with unknown creatures of the dark. One example is the Malitangtang bridge. Actually, the bridge became haunted because the place where it was is home of the so-called engkantos (fairies).

This urban legend was featured in the movie Shake, Rattle and Roll 6, starring Ara Mina, Lot-lot de Leon, and Aiza Seguerra. The story tells about the ghost of the child, named Mauro Flores, who was killed in the bridge, continuously haunts and induces other children to jump over the bridge then eventually dies. He was just doing it to have friends. The haunting stopped when they recovered the skeleton of the said child.